António Guterres was chosen on merit and takes over the United Nations during an especially turbulent period and after a decade of low-key leadership and low staff morale. The “first” UN of governments includes the five veto-wielding members of the Security Council (P-5) that are stoking conflict, flouting international humanitarian law, breaching territorial sovereignty, and whose publics are turning inward.

The “second” UN of organizations is helping to relieve the plight of tens of millions of people displaced by wars and poverty, but is viewed by many from inside and outside as slothful and disjointed. The need for an effective world organization has never been greater, but current crises and long-standing shortcomings are exposing its weaknesses.

Constant feedback is needed from the “third” UN, in whose name the world body was created. This fourth FUNDS global survey reflects the concerns of the global public and proposes a host of changes for the new Secretary-General and his transition team to consider.

The fourth FUNDS biennial global survey of perceptions of the UN was undertaken at the end of 2016. It attracted over 2,700 respondents from 154 countries. The breakdown by gender was 59/41 male/female.  The largest cohort of respondents was from the private sector, followed by academia, UN staff and non-governmental organizations.

The general tone of the respondents was negative about the operational effectiveness of the UN today, in all but its peace operations. But the survey also sent some clear and constructive messages about the future direction of the world organization. The full Results of the FUNDS Survey on the Next Secretary-General can be downloaded here, this briefing provides a summary and analysis of key findings.

Summary of findings expressed by respondents
Today’s UN is more ineffective than effective; it is considered least effective in the Middle East and North Africa.

Peacekeeping and peacebuilding are the UN’s most important functions.

The new Secretary-General’s most immediate priority is “addressing urgent crises of conflict and human displacement.”

UN staff consider that a review of the effectiveness of the UN development system was the most important organizational priority.

The Secretary-General’s two most important staffing priorities are to fill the highest posts on the basis of merit and to protect potential whistle-blowers.

There should be at least two Deputy Secretaries-General with specific line responsibilities.

Organizationally, the highest priority should be a review of all mandates for all UN entities.

After five years, there should be closer integration of the UN’s main functional pillars.

The UN should increase the use of social media and engage more frequently and closely with the global public.

UN Effectiveness
A majority of respondents (63 percent) considered the world organization to be ineffective, against 41 percent effective Those working in government and the public sector were more positive than UN staff. Among the major regions, the most negative feedback was from the Middle-East and North Africa (72 percent ineffective).

As in previous FUNDS surveys, peacekeeping and peacebuilding were considered the UN’s most important functions, followed by human rights and justice. However, there were important differences by region, gender, and profession. UN staff considered sustainable development to be the highest UN priority as did those from developing countries, who also placed sustainable development ahead of human rights.

Priorities for the first six months
Respondents from every region in the survey found that the Secretary-General’s most immediate priority was “addressing urgent crises of conflict and human displacement.”  Allied to this was the need for a new agenda for peace and implementation of the peacekeeping and peacebuilding proposals approved by the General Assembly in 2015. UN staff considered that a review of the effectiveness of the UN development system was even more urgent. 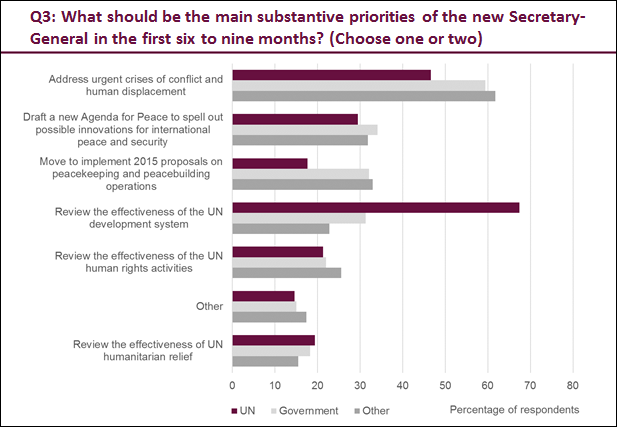 The top two staffing priorities were the protection of whistle-blowers and the appointment of senior posts based on merit.  Given the traditional jockeying for key positions by the P-5 countries, the appointment of key under-secretaries-general will present a special challenge for António Guterres and be his first acid test of a willingness to run risks.

The first and most important appointment is the Deputy Secretary-General. Respondents revealed a clear preference for the appointment of two or more deputies, undoubtedly in response to the hitherto amorphous nature of the post. Various reform proposals, for example, have been calling for a development coordinator for almost five decades.

Priorities for organizational action gave the highest ranking to a review of the mandates of UN entities (48 percent), coupled with the need to revisit previous reform proposals.  Pursuing the Delivering as One (DaO) principles and identifying innovative funding sources was considered more important than reducing the actual number of UN entities. The survey thus considered that the UN system was ripe for reform, while retaining its overall structure in the short-term.

After five years...
In looking ahead to the most desirable achievements at the end of his first term, the survey gave the highest priority to closer integration of the four main UN functions: peace and security, sustainable development, human rights and justice, and humanitarian relief. This concern undoubtedly was a clear reflection of continuing frustration with UN silos. Working in parallel invites duplication and waste and itself compromises the UN’s effectiveness.

The second ranking was given to effective monitoring and implementation of the Sustainable Development Goals (especially favoured by UN staff respondents) and monitoring the Paris Accord on climate change. More than a third of UN staff also called for fewer organizational entities, reflecting seemingly a readiness for more radical internal reform than is commonly perceived. 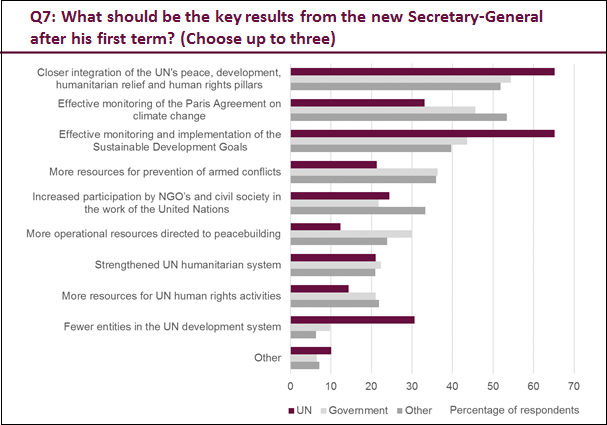 Communications
The survey revealed the importance attached to the UN’s connecting more closely and regularly with the public if it is to retain credibility. The most popular proposal by far was the expanded use of social media, the choice of almost 60 percent of respondents. One third of civil society respondents considered regular town hall-style meetings—like the ones held in July with the candidates to become Secretary-General—to be desirable. These proposals were ranked higher than the more traditional communications methods involving UN ambassadors, press conferences, and UN television.

In Sum...
The clamor for at least change and even transformation has never been stronger, and the world organization should open itself more open to feedback from the global public if it is to understand better the current levels of concern expressed by our respondents.

The arrival of a new and highly experienced Secretary-General on 1 January 2017 provides an unusual opportunity to review a host of proposals for UN reform and stave off the danger of further marginalization. The history of relatively bold moves by most secretaries-general in the post-Cold War era provide hope for António Guterres in 2017.

Amidst the toxic politics of many countries turning inward, the world can ill afford a weak and unresponsive United Nations.

Stephen Browne is Co-director of the Future UN Development System Project (FUNDS) and Senior Fellow of the Ralph Bunche Institute for International Studies, The Graduate Center, The City University of New York, visiting lecturer at the Graduate Institute, Geneva and former Deputy Executive Director of the International Trade Centre, Geneva. He is the author of several books on development and the UN, including Sustainable Development Goals: Seven Decades of UN Goal-setting (2017, forthcoming), The United Nations Development Programme and System (2011), and co-editor with Thomas G. Weiss of Post-2015 UN Development: Making Change Happen? (2014).

Thomas G. Weiss is Presidential Professor of Political Science and Director Emeritus of the Ralph Bunche Institute for International Studies at The City University of New York’s Graduate Center; he also is Co-director of the FUNDS Project. 2016 Andrew Carnegie Fellow, Past President of the International Studies Association and its 2016 Distinguished IO Scholar, and past chair of the Academic Council on the UN System, his most recent single-authored books include What’s Wrong with the United Nations and How to Fix It (2016); and Humanitarian Intervention: Ideas in Action (2016); Governing the World? Addressing “Problems without Passports” (2014); Global Governance: Why? What? Whither? (2013); and Humanitarian Business (2013).