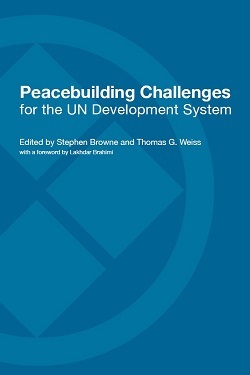 This new publication, based on an off-the-record discussion among experts in Geneva in March 2015, asks: Are the UN’s resources, and the mandates it is given, up to the complex task of twenty-first-century peacebuilding? What is the UN’s future in this area? And, how can its prospects be improved?  It provides additional, timely impetus to the need for dramatic change and feeds into ongoing efforts to actually foster this change, rather than more rhetoric.

‘Peacebuilding Challenges for the UN Development System’ reflects FUNDS determination to bring new voices into the discussions on peacebuilding reform. It complements recent reports from the High-level Independent Panel on Peace Operations and the Advisory Group on Review of Peacebuilding Architecture. It is also pertinent for the formulation of the post-2015 Sustainable Development Goals, especially #16 on "peaceful and inclusive societies". Alongside this global process to agree on how to build what is often called “The World We Want”, the objective of the FUNDS project is to identify answers to the parallel question, “What is the UN We Want?” This new report considers how to create a UN able to meet modern peacebuilding challenges.

Difficult questions asked in Geneva, and addressed in this publication, unearthed harsh realities -- including the deeply unsatisfactory relationship between the Security Council and the Peacebuilding Commission -- and demonstrated that the UN Development System is currently ill-equipped for peacebuilding. This publication makes several practical proposals for rectifying this, including for the UN to thoroughly re-examine its field presence in conflict-prone states, to promote harmony in policy as well as operations, and to make use of the 2016 election for a new UN secretary-general to accelerate reform.

As Lakhdar Brahimi, who participated at the Geneva discussions, writes in his Foreword to this report:

“Above all, courageous steps are needed within the UN both to strengthen its capacities and bring about a change in culture. Only then will the world organization be more effective in performing its most important function of countering conflict.

“The conference raised many pertinent questions and provided some answers. My hope is that this excellent brief report and the accompanying essays will be widely circulated and read by those who have the capacity to influence the direction of change. There is no more urgent priority for the United Nations and the world today.”

12:28:41 02.08.2015 | K V Thomas
Author, human rights' activist and public policy analyst.
Kudos to Stephen Browne, Thomas G. Weiss and Lakhdar Brahimi for bringing out an outstanding document covering a mosaic of recommendations/insights to make UN Peace keeping operations more fruitful to counter conflicts and to work out post -conflict rebuilding strategies. Of the various suggestions, what appears to be more significant are those relating to research, knowledge and learning in conflict zones for more effective operations and more integrated approach/functioning of Peace keeping teams. Ironically, many of the peace keeping teams are tailor-made by member countries,hurriedly selected (at the instance of visiting UN Teams)and deployed in conflict areas or countries without having any understanding or knowledge of the problem or conflict ( Perhaps mere driving skills are given preponderance more than actual knowledge or expertise while selecting personnel for such missions!). Many of such personnel are guided by monetary benefits and the craze to work (?) visit a foreign country.. Perhaps, there are limitations for UN to recruit more experienced and able personnel from member countries; but the PeaceKeeping Commission can definitely formulate a selection/Recruitment system instead of resorting to adhoc arrangements which eat away the scope of recruiting right personnel for such missions. I hope that such issues should be given due priority when UN tries to revamp the peace- keeping operations world-over.