Survey on the UN's Peacebuilding Record - The Results Are Out! 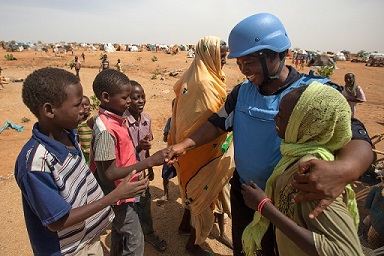 2014 Survey on the UN's Peacebuilding Record

A targeted group of respondents was asked to identify the strengths and weaknesses in the UN’s record of working in conflict-prone states, and recommend strategies for future change.

When asked to assess the UN’s record in different areas of work, respondents ranked ‘Peacebuilding & Development’ lowest -- with just 52% believing that it has been ‘effective’ -- after ‘Humanitarian Aid & Human Rights’ (which 74% consider effective), and ‘Security & Peacekeeping’ (which 57% found effective).

Respondents identified 'Understanding the causes of conflct' and 'Good communication with Stakeholders' as the most important factors determining the UN's effectiveness in peacebuilding (see Q8 graph below); and ranked closer cooperation among UN activities -- both in-country and at HQ -- as the most indispensable requirement for strengthing UN peacebuilding in the future (see Q10 graph below).

Download the complete Peacebuilding Survey Results here for presentation of findings in an array of graphs, and ranked lists of recommendations. To see the results broken down between Developing/Emerging and Developed States please click here; on many issues the views from the South and North are fairly similar, but the Survey did reveal some important differences, for example 50% of respondents from Developing/Emerging states think that closer UN cooperation in-country would strengthen UN peacebuilding, compared to 70% in Developed states. Respondents from the 'South' also expressed slightly more favourable perceptions of the effectiveness of the UN Peacebuilding Commission.

For an analysis of these findings please see FUNDS' March 2015 Briefing by Stephen Browne and Thomas G. Weiss, 'What's the UN's Future in Peacebuilding?'

These results were also discussed at the FUNDS Peacebuilding Conference in Geneva on 19-20 March 2015; more information here.

Thanks to everyone who took part in this Survey! 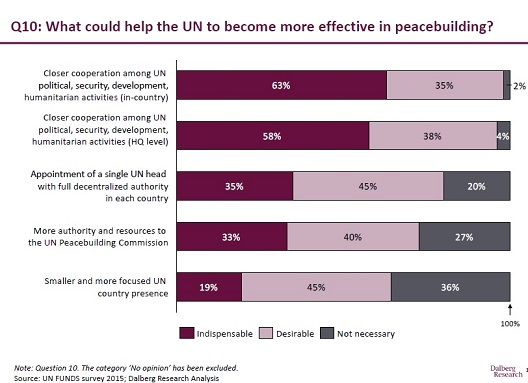