Advice to António Guterres: A Leaner UN Could Be a Better UN 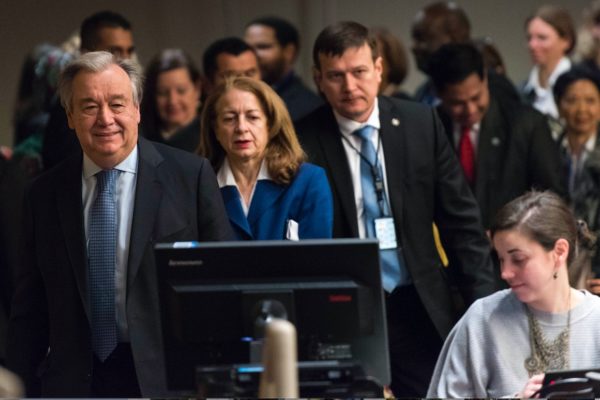 GENEVA — Whether or not he is a fan of Chinese characters, António Guterres will have to discover the double meaning of a crisis as opportunity. United Nations corridors on First Avenue in New York are buzzing with anxiety about the possibility of impending cuts in funding from the United States, with hints from a Trump budget sketch of large reductions.

As the ninth UN secretary-general, Guterres can use this occasion to implement a long-overdue transformation in the world organization’s management — leaner if not meaner.

Unilateral decisions to cut funds, without consulting the UN members, however, run contrary to the spirit of multilateralism, and Guterres will be rowing against the tide of impending cuts. His task is not enviable, but it is crucial and doable.

“The SG [secretary-general] stands ready to discuss with the United States and any other member state how best we can create a more cost-effective organization,” said his spokesman earlier this month. Cost-effectiveness can occur in at least two ways: doing more with the same resources or doing the same — or better — with less.

Given the patronage associated with the UN — with donors favoring organizations and activities that respond to their needs, and developing countries always seeking to expand the system — the notion of cost-effectiveness is constantly discussed but rarely delivered despite successive waves of attempted reform. Possible cuts in UN funding, however egregious the rationale, could provide the impetus for a long-postponed and desperately needed change in how the UN Secretariat and its funds and programs do business.

Successive independent  of UN-watchers worldwide conducted by the Future UN Development System (FUNDS) project at the City University of New York Graduate Center’s Ralph Bunche Institute have amplified the clarion calls for change. Respondents to a survey at the end of 2016 on the new secretary-general’s agenda (in which 52 percent of respondents found the UN to be “not effective”), gave the highest priority by far to “reviewing the mandates of all UN entities.” (see below) 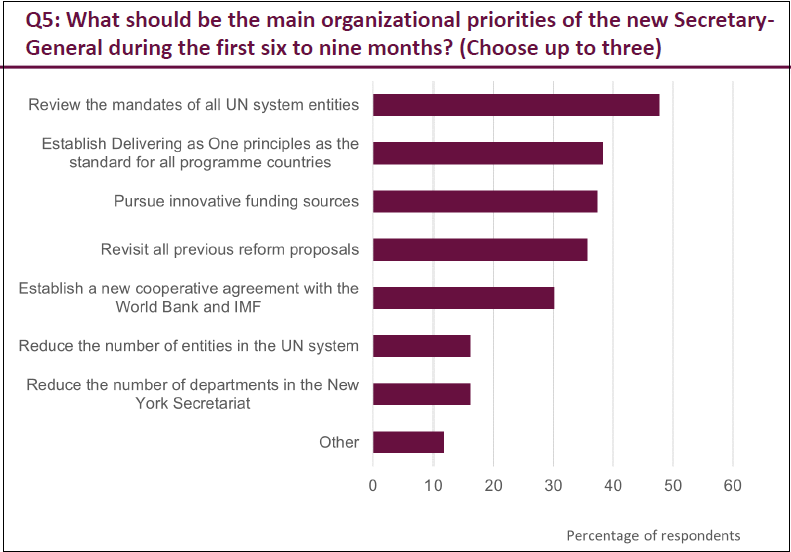 Those respondents working within the UN gave it an even higher score than other professional groups. The most important result for the new secretary-general’s first five-year term, chosen by more than half the respondents, was “closer integration of the UN’s peace, development, humanitarian relief and human rights pillars.”

Most denizens of the Beltway would not disagree.

When asked about necessary changes to the UN system by 2025, 70 percent listed “fewer organizations,” (see below) and there was virtual unanimity (95 percent) in calling both for greater use of technology “to cut costs and improve efficiency” and for “updated mandates and activities of organizations.” 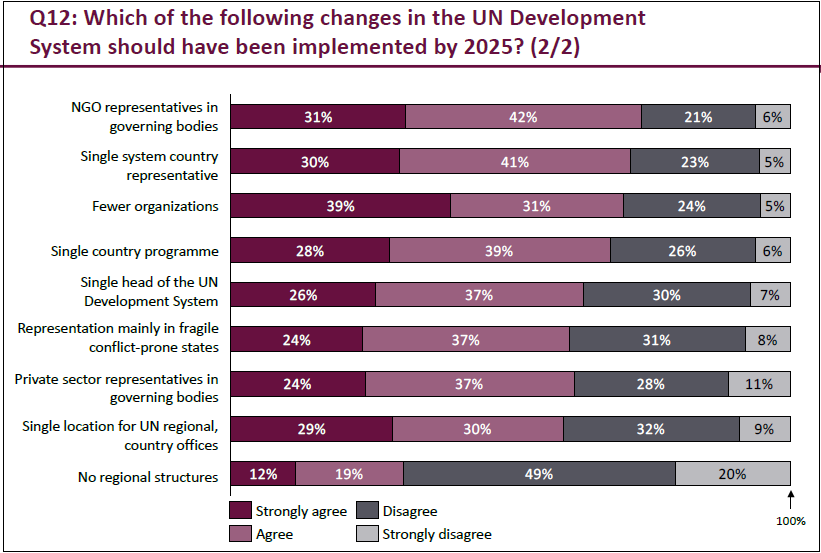 Numbers speak for themselves in the current UN development system. There are three UN agencies — the Food and Agriculture Organization, the World Food Program and the International Fund for Agricultural Development — that are supposed to address problems of food, agriculture and rural development. Although they are all located in Rome, they mostly work independently of one another and even maintain separate country representations.

Three UN organizations collect data and do research on international trade — UN Conference on Trade and Development, International Trade Center and UN Department of Economic and Social Affairs — which also work independently and separately from the World Trade Organization (not in the UN) as well as the World Bank and the International Monetary Fund, which are de jure but not de facto part of the UN system.

Astoundingly, there are 29 UN organizations with programs on water. UN Women and the UN Population Fund share mandates but not resources in pursuing working projects for women. The UN Environment Program and the UN Development Program both have full-fledged agendas on environment and energy. They also compete for resources from the Global Environment Facility, an independent constellation of UN organizations, regional development banks and nongovernmental organizations established on the eve of the Earth Summit in Rio de Janeiro in 1992.

To be fair, examples of UN organizations working together exist: the UN Environment Program and the World Meteorological Organization jointly manage the Intergovernmental Panel on Climate Change; the three Rome-based agencies, together with Unicef and the WHO, collaborate in the Standing Committee on Nutrition. In addition, Unicef and WHO combine their efforts in vaccination programs.

But these are exceptions that prove the rule. The fact that they have pooled efforts and pulled together only suggest the vast scope for greater organizational consolidation with far less duplication.

Rare mergers among UN organizations — in drug control (two entities) and women (four entities) — have occurred as the overall number of UN organizations, departments, commissions and research and training institutes has grown steadily over the years. New institutions and units are added; rarely do any disappear. Overlap and duplication are met with more mechanisms of consultation. The Global Migration Group, an interagency working group, includes 21 UN entities. The UN Development Group, admittedly the main work of the system, includes more than 45 members and observers.

These mechanisms highlight parallelism and lead to a further proliferation of meetings and consultations but fail to address the fundamental problems of doing more with less. Even the task of getting all the UN organizations onto the same IT platforms remains unfinished.

While convinced multilateralists do not wish for a weaker UN, size does not equate with impact or effectiveness. Change is often a reaction to shocks and crises — and having to make do with fewer resources could lead to a less bureaucratic and more joined-up UN, which its supporters around the world have repeatedly called for.

António Guterres, are you listening? Crisis or opportunity?


This article was originally published by PassBlue on 27 March 2017.

02:53:22 27.09.2017 | board of education
34NH3
If some one wants to be updated with most up-to-date technologies then he must be pay a visit this website and be up to date every day.
board of education http://learninghints.eu/
06:50:18 02.06.2017 | share investment advice
WNSLP
Hmm is anyone else having problems with the images on this blog loading? I'm trying to determine if its a problem on my end or if it's the blog. Any feedback would be greatly appreciated.
share investment advice http://investingtips.eu/